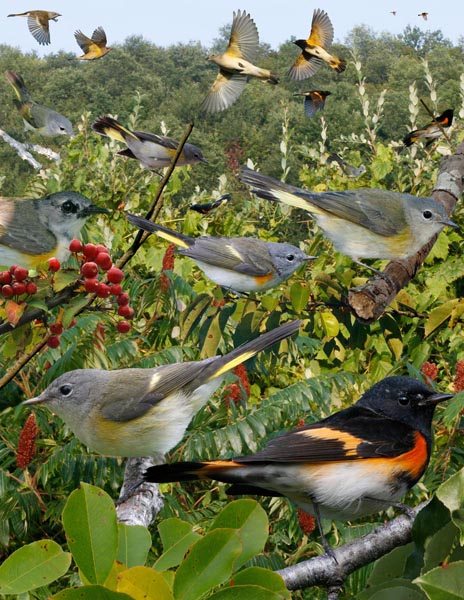 Very common breeder in deciduous forest. Often the commonest migrant, particularly in early fall. Always active, often fluttering 'butterfly-like' as they drop down to catch insects. Short broad bill, rictal bristles, and long tail that is fanned . Flits from branch to branch, leaning forward and rotating from side to side. Often partially opens wings and spreads tail to reveal patches of yellow and orange. Then it's off again. Song variable, usually a number of sweet high-pitched notes trailing off at end. ID: Striking shape and behavior. Yellow/red bases to flight feathers and long rounded tail. Same color pattern for all but ad ?. Ad ?: black, red, and white year-round. Ad ?: underparts pale with breast sides yellow to orange. Gray head contrasts with browner back. Broad yellow bases to flight feathers. 1st-w ?: overlaps with ? but often brighter orange breast sides and stronger contrast between head and back. In spring has black adult-like feathers on head and neck. 1st-yr ?: palest breast sides, narrow wing bar.