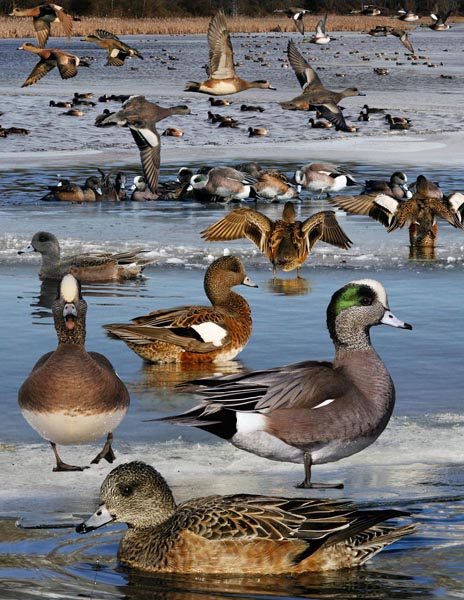 Northernmost breeding dabbler. Widespread and fairly common, often forms large noisy flocks in winter in wet areas or grazing in fields. High-pitched whistles belong on a football pitch. Can be tame, hanging around local ponds with Coots and gulls. Look for striking upperwing pattern of males in distant flocks. Also known as Baldpate for its white/yellow crown. ID: Smaller than MALL with peaked forecrown, small bill, chunky body, long tail, and short legs. Flocks appear as a variety of pinks and burnt oranges with variable head patterns. Male has distinctive head pattern and black tail bordered by white. Eclipse male looks like bright female with large white covert patches. Juv male similar to eclipse male but covert pattern resembles female. Most appear same as adult male by late fall. Females duller with small white wing patches (this absent on most juv females). Gray-brown flecked head usually has smudgy patch around eye. In flight male has the most white on the upperwing of any duck; female much duller, creating flocks of two color patterns.