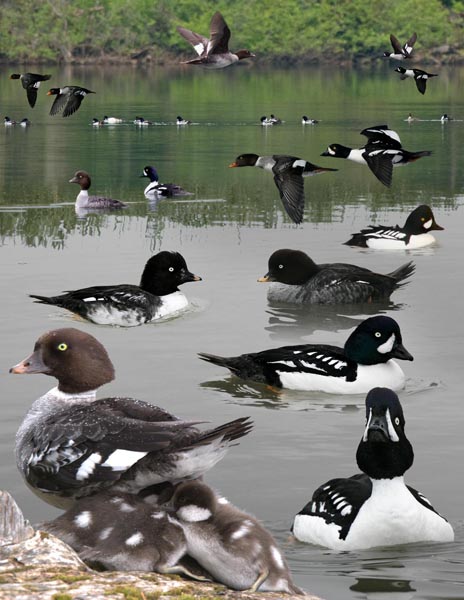 Scarce cousin of COGO. Similar in all ways and usually found while searching through flocks of COGO in winter. ID: Sometimes easy but often subjective with very little concrete to hang your hat on. Focus on bill and head shape. Bill is shorter and therefore more triangular, but variation in COGO often leaves doubt. Head shape often striking with steeper forehead and much more puffed-out nape area when neck is held erect. However, judging this on all birds may be difficult. Generally, subtly smaller and more compact than COGO. Female bills average stronger yellow than COGO with more orange tones in winter and is noticeable in a flock - good as a starting point but variable and always confirm bill and head shape. Darker-billed in summer. Young and eclipse males follow similar molt pattern as COGO. Adult male id is more straightforward. Shape, typically purple iridescence to head (not green), black vertical flank spur, smaller white scapular spots and white face crescent are all easy to see. But beware of hybrids which occur regularly enough to be a concern. These show intermediate features.