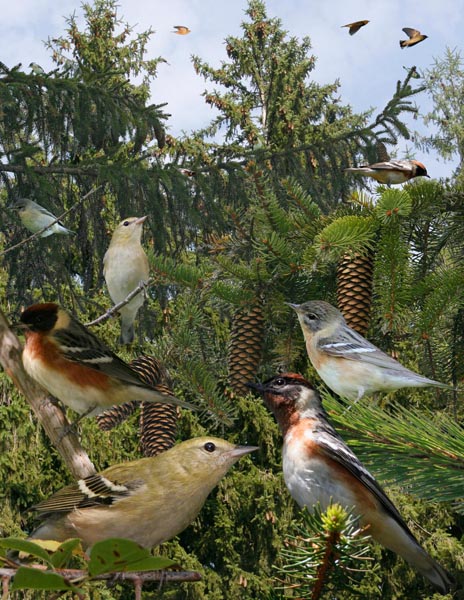 Uncommon to scarce spruce bog breeder in the tallest trees. Also prefers spruce on migration but found elsewhere. Often found with CMWA and BLWA. Call a hard 'zeet' or 'zick' (similar to YEWA, BLWA, COWA - 'the zickers'). Song a few high-pitched 'zee' notes, similar to CMWA and a short BWWA. ID: A large, powerful warbler, like BLPW with slightly rounder crown and broader-based bill. All plumages have large wing bars, streaked mantle, rufous wash on flanks, and buff wash to undertail coverts. Ad ? br: uniquely colored brown cap, throat and breast sides with black mask. Ad ? br: duller version of ?. In fall, all birds have dark eyeline, pale supercilium and pale area behind ear coverts. Rufous flanks are darkest in ad ? and palest in 1st-yr ?. These pale birds are similar to pale BLPW but buffy rather than white on flanks/undertail coverts. They also lack strong yellow tones or diffuse streaks on breast, have greener upperparts with fewer streaks, dark feet, and broader wing bars. PIWA has different shape, and face and color pattern.