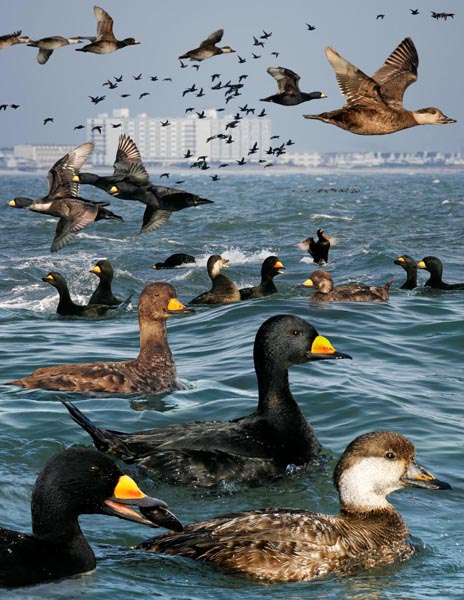 Common sea duck often in large flocks mixed with other scoter and ducks. Some migrate inland from tundra breeding grounds and are seen on larger bodies of inland water. On migration or moving between feeding areas form large, variably patterned lines of birds, often with SUSC. In winter/spring males give incessant whaling call, often in small groups wooing a single female (lucky thing!). ID: The smallest and chunkiest of the scoters with diagnostic bulky round head allied to bill shape and color. The undercarriage is evenly rounded, lowest in the center. Imm birds have pale bellies that are easy to see in flight. Males glossy black with yellow-orange knob on bill. Females and juvs have conspicuous pale throat and face similar to smaller RUDU. This area becomes darker through winter in young males and they also develop yellow-orange knob on bill. By second winter, males may show browner throats and slightly reduced knobs but most are as adults. In flight, relative to SUSC they have an evenly domed undercarriage, broader, less swept-back wings, shorter thicker necks with big heads and less pointed 'face' that's discernible at long range with practice. Flight feathers usually contrastingly paler than coverts, but shape and bill pattern easier to see.