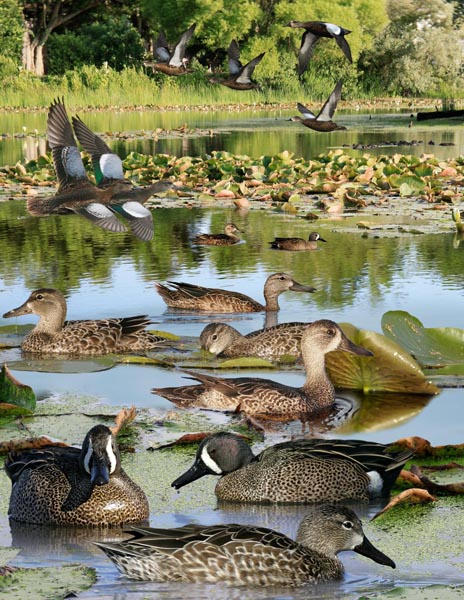 A welcome summer visitor (some winter in the S) usually in pairs or small parties, often announcing itself with a high-pitched 'kip'. Can be quite tame. Fairly common on a variety of shallow marshy wetlands, usually near vegetation. ID: Small dabbler; slightly larger than GWTE. Sits low and long in the water and with a wide, flattish head, but looks long-necked when head held high. Bill fairly large, broad and all black. Male's half-moon face is striking at long range. Pale blue coverts striking in flight (but can appear light gray). Eclipse and young males are similar to females at their drabbest but retain bolder male wing pattern. Late summer and fall birds often show a 'ghost' of the face pattern and other non-eclipse feathers. Females appear brown-gray with well-defined pale fringes to feathers often creating a neat appearance. Distinctive pale area at base of bill. Often confused with NOSH - check comparative size! Striking upperwing pattern with pale blue forewing, similar to NOSH and CITE.