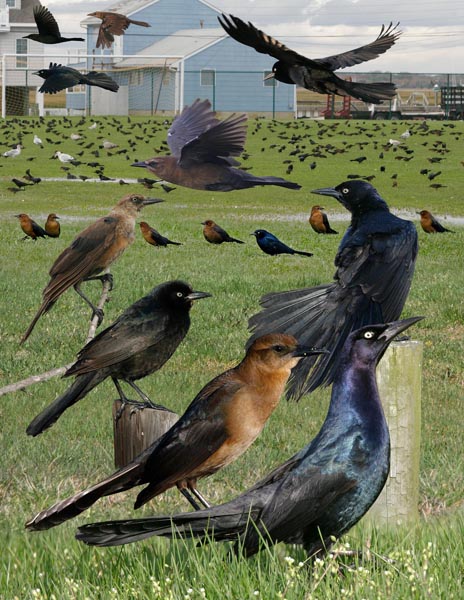 The grackle of coastal marshes. Forms flocks in winter, often moving to playing fields, and readily perches on rooftops. Pathetic song for such a bruiser of a bird. Very vocal and aggressive. Rarely seen with other blackbirds. ID: Larger than COGR with longer, more bulbous-ended tail. Bill longer and more pointed. Head shape variable from rounded to quite pointed. Atlantic Coast population has pale iris, FL and Gulf Coast birds have dark iris (see GRGR). Ad ?: head variably purplish/blue, darker than green/blue body. ?: head and underparts tawny brown. Paler throat and supercilium contrasting with darker ear coverts and lores. Upperparts dark brown. Juv: as ? but paler and duller. Imm ?: dark, short-tailed with no iridescence. Calls are variable piping whistles and 'chuks,' not so varied or strident as GTGR.