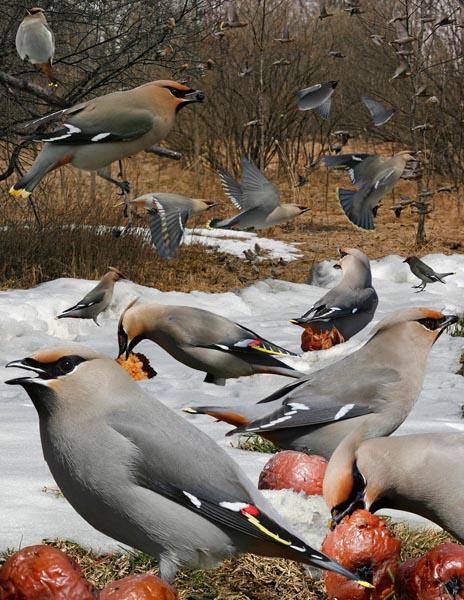 An irruptive n. bird that mostly stops at the border but occasionally comes s. in numbers. Much bigger than its cousin, they quite often party together. S. wanderers are nearly always with CEWA, but sometimes with COST. In winter, usually in flocks, some numbering hundreds. In a harsh environment, they can often be seen swarming around fallen fruit, seemingly gorging themselves as if they might go hungry for a while. Oddly, they frequently flycatch en masse from the tops of trees - a good way to find them. Mobile, large groups can appear and disappear surprisingly quickly. ID: From CEWA by large size, gray coloration, and rich brown vent. Also more extensive pale tips to flight feathers, more extensive dark throat and deeper trilled call. Ad ?: sharp edge to black throat. Broad yellow edge to primaries. Broad yellow tail band and red 'rackets' to secondaries. Ad ?: soft edge to throat, narrower yellow inner border to primaries, reduced dark on chin. 1st-w: lacks yellow inner web to primaries. Juv: streaked underparts.