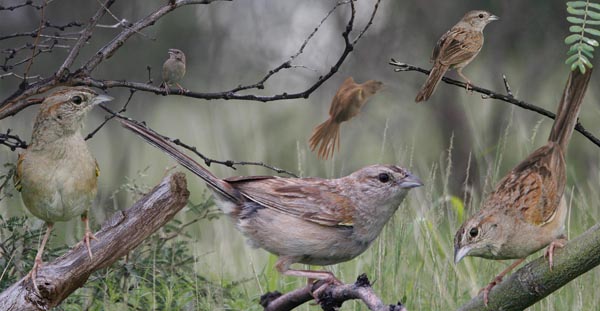 Scarce in s. TX, in similar habitat to CASP. Behavior also similar though doesn't skylark. ID: Similar to CASP in size and shape but with flatter-headed look, in large part due to much larger bill. Overall impression is of a plain sparrow, rufous above with black streaks, gray and buff below. Differences from CASP also include uniform underparts with black streaks but without broad pale fringes to feathers, darker relatively unstreaked crown, and streaked uppertail coverts (anchors in CASP). Has indistinct eyering, throat lacks dark malar, and has more uniform underparts. Song: a series of notes accelerating like a bouncing ball with a couple of grace notes before and after.