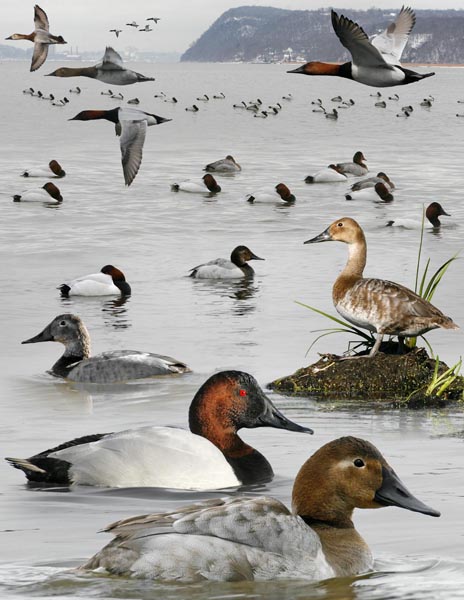 Locally fairly common, often in flocks in deeper water inland and brackish water in coastal areas. Frequently with other bay ducks. Nests on small marshy ponds. Wide ranging with favored wintering areas, where flocks in thousands from Great Lakes to Mexico, but there are also large stretches of land with very few individuals. ID: Largest bay duck with a diagnostic slim-necked and angular-headed profile accentuated by black bill. No recognizable imm plumage??? Males have striking red eye. Often compared to REDH, but Canvasback is a totally different shape and much paler. Females appear pallid and two-tone: gray body and brown neck/head, though upperparts take on browner tones in summer. Uniform face with line behind eye. Shape is equally distinctive in flight with large wing bar often not obvious because of overall paleness.