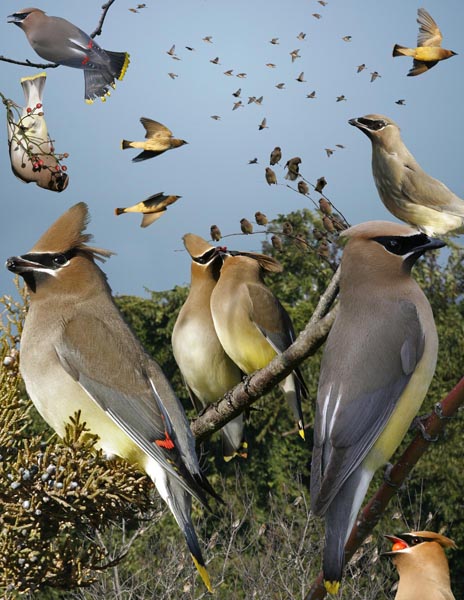 Common in a wide variety of habitats where berries and other food available. Often around gardens, popping in for a bit before bombing off, seemingly in a great hurry, with direct flight and very fast wingbeats. In winter, usually in flocks from a few up to 100 birds. Will descend on bushes, sometimes mixed in with AMRO and bluebirds, to scoff ripened berries. Sits upright but will hang upside down or hover to grab dinner. Often seen drinking from puddles. Late nester, coinciding with food supply. Vocal: a high-pitched, almost off the scale 'tseeeee' (many notes to create one sound!). In flight they form tight packs and can quite easily be dismissed as COST. ID: Punky-crested, and a heavy-set bird with long wings and a shortish tail. Mostly pale brown, yellow on belly with a bold yellow (rarely orange) tail band and a Zorro-type mask. Ad ?: extensive black chin, red 'rackets' to secondaries, and yellow tips to primaries. Ad ?/ 1st-w ?: smaller, duller chin, with less red and yellow in wing. Imm ?: dullest. Much variation, and tips to wing feathers often worn away increasing difficulty. Juv: heavily streaked underparts lost through fall.