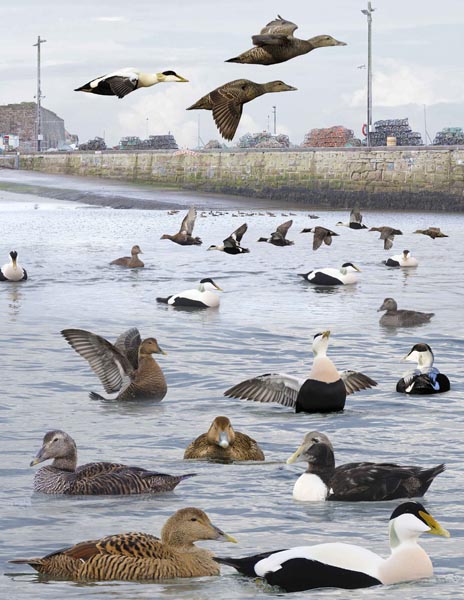 Very common n. sea duck of rocky coastlines and jetties. Occasionally seen in other areas. Usually in tight flocks. Nests colonially on ground on rocky islands south to ME. Large groups with chicks are a common sight close to shore. Formerly hunted for 'eider down.' Powerful flight, typically in lines. Long take-off with water splashing everywhere. ID: Large with a unique profile created by long neck, long sloping bill, and high forehead. 3 races are often separable by lobe shape: 'dresseri' (Atlantic Eider) is commonly seen from Newfoundland s. (shown in plate); 'borealis' (Northern Eider) of the high Arctic has the smallest bill; 'sedentaria' (Hudson Bay Eider) is intermediate in bill size and mainly resident in the Hudson Bay area. Takes approximately 3 years and 8 molts to reach adulthood. Females brown and intricately patterned. Large variation in color tones, though Atlantic birds are generally the richest in color. Summer females and juvs tend to be duller. Juv males darkest, becoming progressively more pied through the first winter. By second winter/third summer they are adult-like with variable signs of immaturity, notably dark tertials. By 3 years old most birds have immaculate black-and-white coloring with lime around the head and cream on the breast (close view). In flight females appear uniform brown with a striking white underwing. Males less subtle.