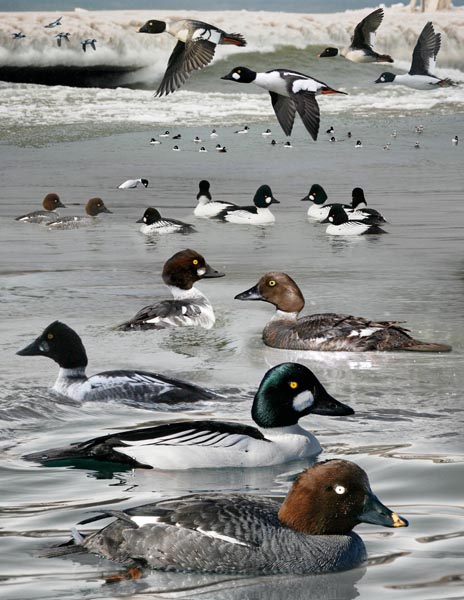 Common and widespread. Breeds on deep lakes and rivers in forested areas, nesting in nearby tree holes. In winter often forms flocks with many dispersing to the coast, but quite at home in cold landscapes. Often found in similar habitat to COME. Male's wings in flight produce loud whirring whistle noise. Often seen flying overhead as they move between feeding areas. Very wary. ID: Medium-sized duck with an oversized head that juts out from the back of the neck, but not so extreme as in the scarce BAGO. Large black triangular bill with variable amounts of yellow. Always seems alert and ready to dive, but always keeps an eye on you. Females' and juvs' brown heads contrast with gray bodies. Eclipse and 1st-w males similar but have extensive white in wing and develop a partial white face patch. Young males molt through first winter/spring into a variable dappled and dingy version of adults. Adult-like by summer. Adult male appears white-bodied and dark-headed with striking round white cheek patch. See BAGO for comparison. Animated displays.