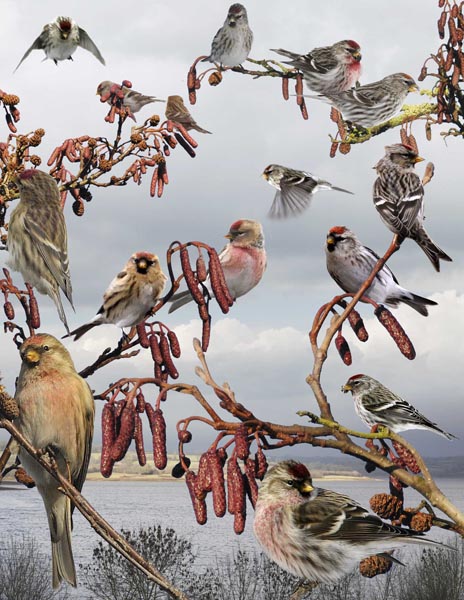 A common breeder in tundra scrub. Nomadic and irruptive, ventures s. in variable numbers. Winters in open fields, parks, and around bird feeders. Found in flocks, sometimes in tens. Takes off in a tight 'bouncing' pack giving rapid 'chid chid chid' calls. Often flies around until it finds a suitable landing tree, and will gradually drop to a birdfeeder or to the ground only to take off again for no apparent reason. Feeds on seeds, often hanging upside-down like a chickadee. ID: Appears as a small ball of feathers with a narrow but strongly forked tail. Small head, stubby bill with black at the base, and red cap give it a cute look. Streaked upperparts, brown on the back, white on the rump. Underparts are pale, with blurry streaks, mostly on the flanks. Undertail coverts streaked, fewest on adult ?. Ad ?: pink on breast, extensive on some. ?/imm: lack pink and are more heavily streaked. flammea widespread. Greater Redpoll (rostrata), from Baffin Is and Greenland, darker with bolder streaking, can be id'd by larger overall size and bigger bill.