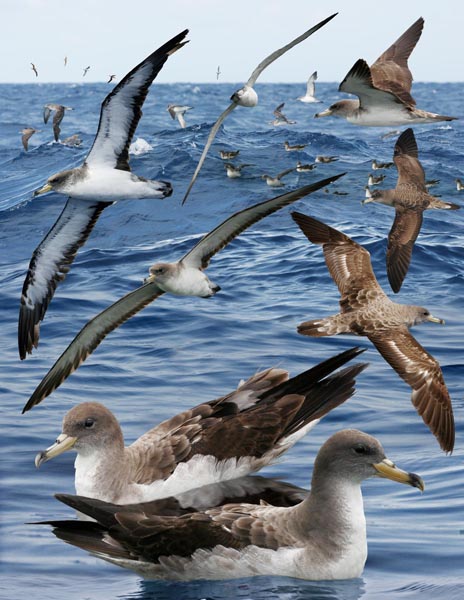 Common summer visitor, rare in winter in warm ocean waters. Usually sits on water in flocks, and congregations occur where food is plentiful. Occasionally seen from shore, usually when windy. ID: Largest shearwater. Heavy build with broad wings, held hunched over with emphasis on downbeat, giving pterodactyl-like feel. 2 races: borealis (Cory's) and diomedia (Scopoli's). Many treat as separate species. Very difficult, often impossible to separate and complicated by most birds viewed being subads. Scopoli's is scarcer, averages smaller with narrower-based, smaller and duller bill, more extensive white on inner web of primaries, and one (2 on Cory's) dark spot on outer greater coverts -but all difficult to judge and much overlap. All have pale upperparts and white underparts with little contrast. Many are in active molt, a mixture of browns and grays with patches of white at the primary bases.