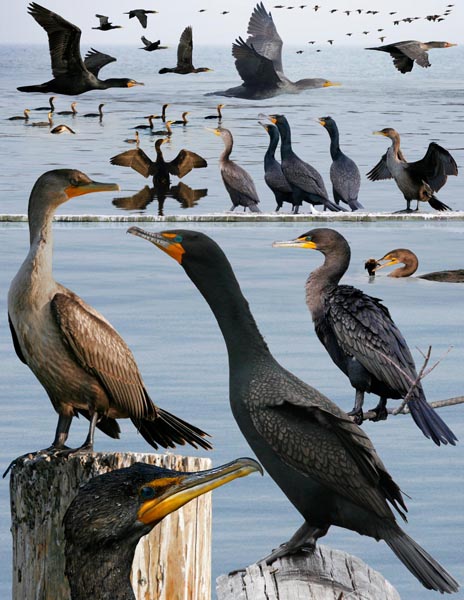 Widespread and very common. Often approachable and found near humans. Occasionally forms massive feeding flocks on lakes where food is plentiful. Also happy in salt water. Creates long, haphazard lines in flight, a familiar site on migration. Often glides. ID: Very variable in color (variation poorly understood). Easily mistaken for both GRCO and NECO, though it is only species found over much of its range. Always check size, tail length, head patterns, and underpart color (1st-years). Up to 1 year old, shows great variation from white to brown underparts and everything in between, but always paler on neck than belly. Gular patch and loral skin varies from deep orange to yellow-orange and is large with smoother rear edge. 2-3-year-olds and nonbr adults (4 years) similar, with varying amounts of brown mixed with black feathers, particularly on neck. Breeding birds shiny black. 'Double-crest' hard to see and varies from white to black. When soars, can be confused with ANHI.