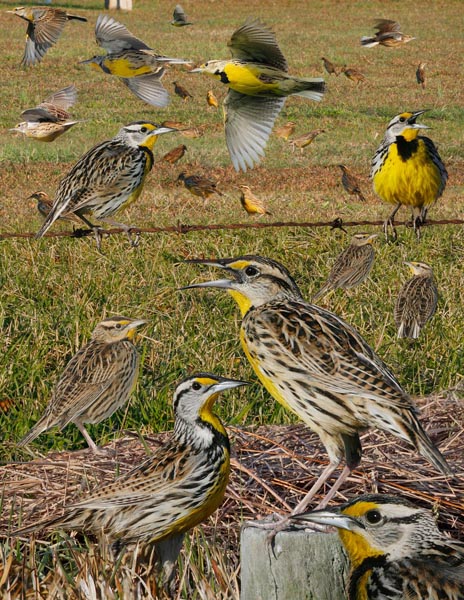 Common and widespread in open grassland. Spends most of the time on the ground but sometimes perches on bushes and fenceposts, your only chance of seeing it when the grass is long. Tends to be common where the habitat is suitable and forms tight flocks in winter. Walks purposefully, head jerking forward, giving a good impression of EUST. In flight, the shape, with rounded wings and rapid wingbeats, followed by short glides, is distinctive. Song: beautiful melodic whistles descending in pitch. Call a sharp 'tzeet,' and a rattle. ID: Large body, short square tail and flat head with pointed bill. Much variation in plumage. Ad br: bright yellow underparts, black necklace with buff flanks and dark streaks. Boldly patterned head and complex upperpart markings with rufous tones. White malar. Ad nonbr/juv: most much duller and strongly buff with reduced necklace.