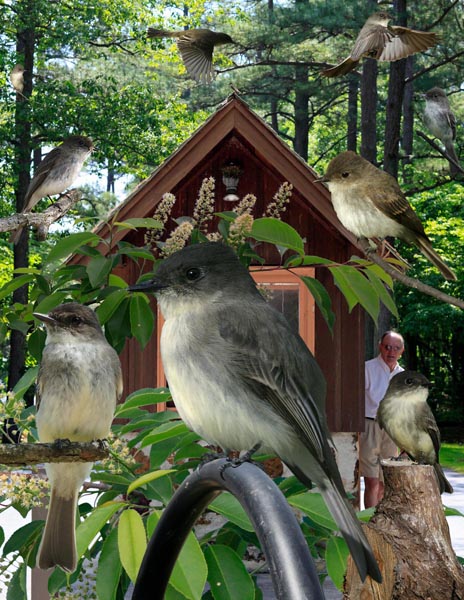 Fairly common and widespread in a variety of habitats from woodland and farmland to suburbs and waterways. Not shy, like other phoebes, it builds a cupped nest under eves or bridges, often in busy traffic areas. The first flycatcher to arrive in spring and last to go in fall. Often sits low, characteristically dipping its tail nice and slowly as if to make sure you see it. Song a gritty 'phe-be.' Call a 'chip' (like SWSP). ID: A large flycatcher, it has soft lines: rounded crown, belly, and back. Fairly long dark tail is square-ended. Dull upperparts always darker-capped and lacking supercilium or bold wing bars. Underparts variably white and yellow with smudgy markings on breast. Ad br: off-white, often with yellow wash. Smudgy dark markings on breast sides. Molts in late summer. Fall birds in fresh plumage have more uniform and yellower underparts. Juv: browner with rusty fringes to wing coverts. Molts into adult-like plumage in late summer.