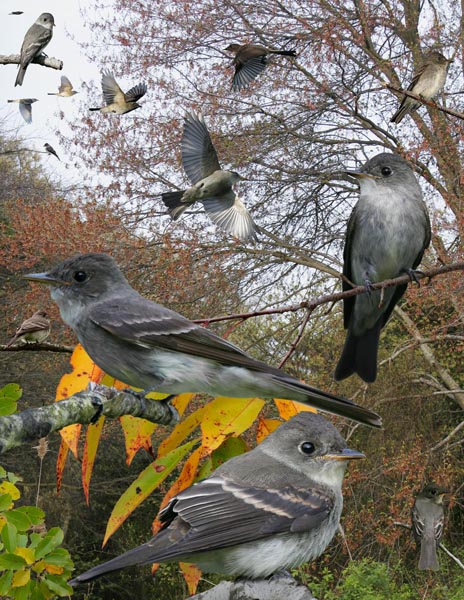 Common flycatcher in deciduous and mixed forest. Often confused with Empidonax, but unlike them it will sit on exposed snags for long periods, scanning the area. After spotting its prey, it makes long sorties to snap it up, often returning to the same perch. Vocal, it often gives its presence away by a drawn-out, 2-note 'peee-weee.' Several calls: 'chip, peeyer, peer' and much variation. ID: Fairly large with peaked crown and long, usually forked, tail, which enhances slim appearance. Wings are long and pointed with primary projection equal to tertial length. If in doubt, make sure you check this feature. Often looks quite dark-faced. Has indistinct or no eyering with mainly dark lower mandible. Undertail coverts show dark centers, and never flicks tail. Underparts darkest on breast sides, creating a subdued version of OSFL. Juv: similar to adult but fresher plumage and broader, buff wing bars.