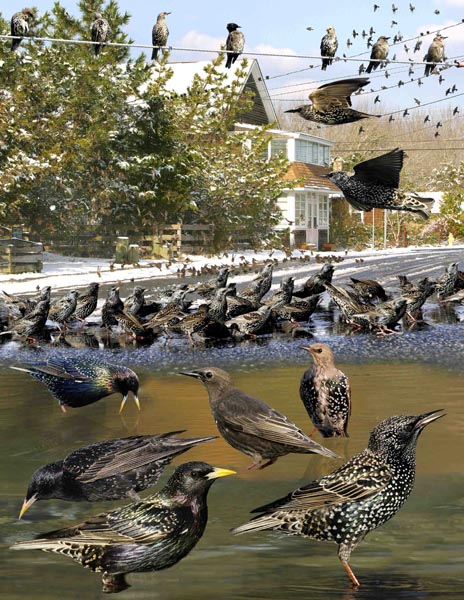 Very common and familiar. Despite its bad reputation, EUST has a subtle beauty. Nests in man-made cavities but also competes for natural holes, often kicking out woodpeckers and other species. Forms large waxwinglike flocks in winter, flying around in tight balls, often with a confused raptor nearby. Stomps around, sometimes inquisitively, at other times marches in a hurry, grabbing food with a big open mouth. Song: a mishmash of whines, whistles, and imitations all wrapped into one. ID: Stumpy with a short square tail. Distinctive profile in flight with broad-based triangular wings. Flight is a series of rapid flaps, followed by short glides. Bill fairly long, straight and pointed. Adult: brightest in fall/winter, fresh feathers with large white spots on iridescent purple and green, though often looks black. Dark lores give mean look. By spring, spots are worn and iridescence becomes more obvious; bill turns yellow. Juv: brown, palest on throat, dark lores, and striking pale fringes to wing feathers. Molts through summer to very different adultlike feathers, giving a pied appearance.