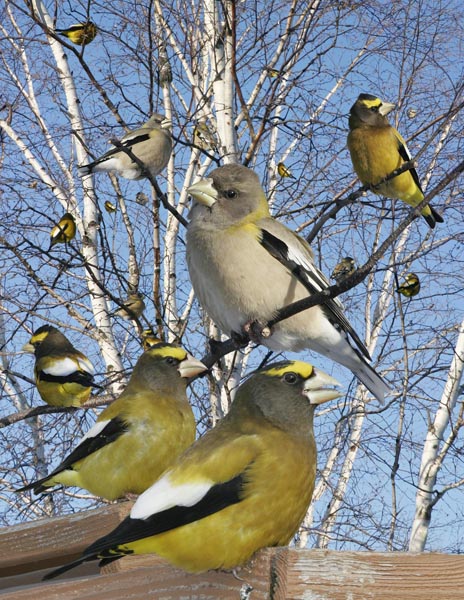 Hardy n. bird that breeds in mixed forest. Wintesr in snowbound lightly-wooded areas, having favorite trees and feeders. Irruptive, though numbers have declined drastically recently and former large movements s. appear to have stopped. Easiest to find in winter, forms flocks that can often be spotted perched like Christmas lights on a tree. Flies in tight flocks, and bold white wing patches always striking. Regular at feeders and often approachable. Noisy, the call a high-pitched 'clear,' sometimes mixed with other chattery notes. ID: Large head and bill with a short tail, a hulking bird with dark through the eye that gives it a mean look. However, at times tilts head, making it seem comical and toy-like. Ad ?: pale bill and striking thick yellow supercilium on dark head contrast with yellow body. Secondaries all white. 1st-w ?: as adult with white tips to greater coverts and old juv primary coverts. ?: milky gray with yellow collar. White in wing extends to base of primaries but duller than in ?.