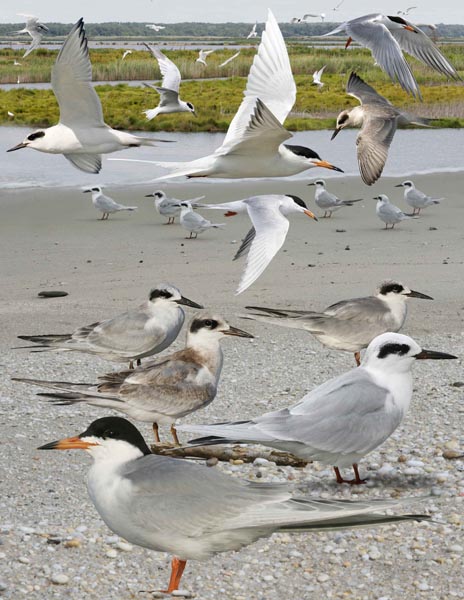 The most common tern in many areas. Breeds in freshwater marshes and is widespread on migration. The only wintering tern in many areas (mostly coastal). Hovers and dives for fish, often in concentrated or mixed flocks. Fond of perching on posts. ID: Variable patterns of color make ID tricky. Subtle but noticeable differences in shape. Compared to COTE is slightly larger, bigger-billed, longer-legged, flatter-headed, thicker- and longer-necked with a less rounded undercarriage. Difference in shape shows better in flight, particularly flat undercarriage. Wings broader-based and less angled. A more powerful look overall! Pale. Distinctive with dark mask in most plumages. Ad br: black cap extends down nape. Bill more orange than in COTE but can be difficult to judge. Upperparts paler gray with distinctive whitish flight feathers but these wear dark through the summer making this field character inconsistent. In flight, the contrast between whiter outerwing and gray innerwing coverts forms striking pale area even at great distance. Very long tail streamers that wear shorter through summer. White underparts (grayish in COTE) also obvious in flight. Nonbr: cap becomes a diagnostic black eye patch by late summer, also in young birds. Dark bill. Molts outer primaries in summer. 1st-year: as nonbr with dark tertials. Juv: ginger-brown feather centers, particularly on back, forming dark 'saddle.' Wear/molt through fall to gray appearance but retains a few worn juv feathers, but all still have diagnostic eye patch.