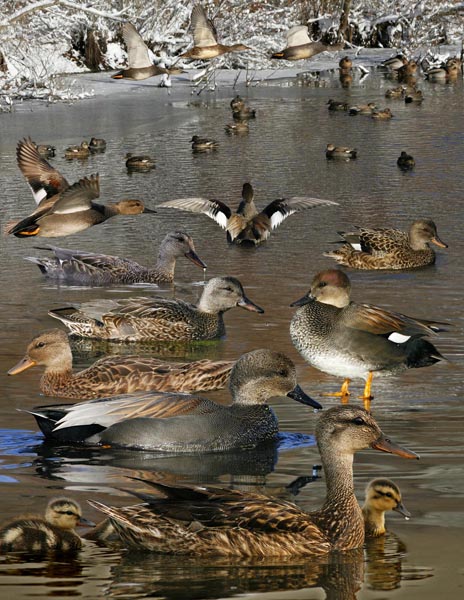 A common duck of shallow wetlands, mostly seen in pairs but sometimes larger groups. Superficially nondescript, so is easy to overlook, particularly when mixed in with other more striking dabblers as often occurs. ID: Slightly smaller than MALL. Distinctive nipped-in neck and steep forehead often gives square-headed look. Head is larger in males than females. Sits high in the water. Male not so striking as some ducks but is intricately patterned and always has striking black butt. Female often confused with MALL and other female ducks but look at shape and orange-sided bill. Pale head contrasts with darker upperparts - solid dark feather centers with diffuse pale fringes. Strong eyestripe. Striking in flight. Upperwing shows white square bordered by black, boldest in males. This can also be seen on some sitting birds. Underparts in flight also quite striking: distinct white underwing and central belly bordered by dark. Male beautifully detailed at close range. Some color variation. Females described above but note bill often darker in summer. Juv males as female, grow adult-type feathers through first fall/winter. Aged in late winter by female-like upperwing pattern and juv feathers in black uppertail coverts.