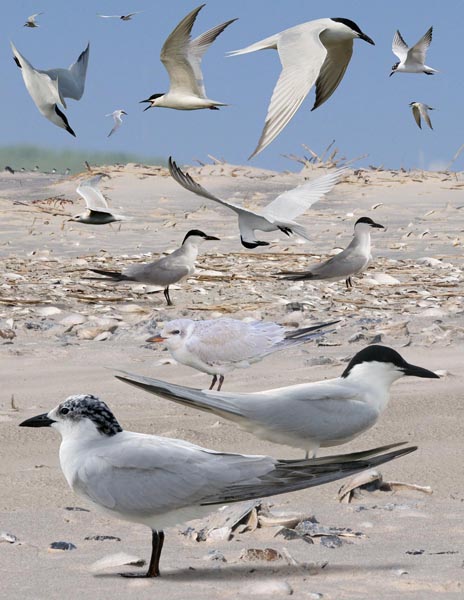 Scarce but widespread in coastal marshes, on beaches, fields, and flats. Sometimes on beaches with other terns. Usually seen alone or in pairs, occasionally small groups, as it gracefully meanders with bouncy, buoyant flight and dips down to pick up insects, crabs, and other prey. Doesn't hover or dive. ID: Medium-sized but sturdy and can appear larger. Obvious short stout black bill (hence name). Long legs. Vocal: laughing call similar to LAGU and often heard before seen. Adult: strikingly uniform upperparts, pale gray with black trailing edge to outer primaries (wear more extensively dark through summer). Black cap in breeding, becomes mottled in fall and appears as postocular spot in winter. 1st-s: similar to molting/nonbr. Juv: pale-fringed and browner but usually best picked out by lack of cap.