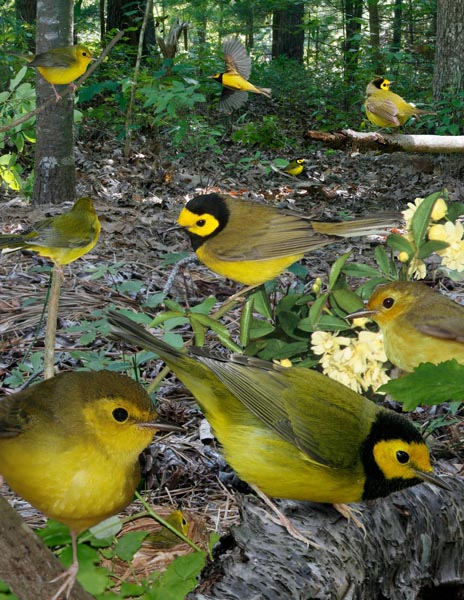 Fairly common breeder in a variety of habitats with dense understory, usually near water. Common in s. swamps. Although it will sing its song from high, it spends most time flitting through lower vegetation and is quite happy jumping around fallen branches. Often flicks its tail open as it goes, as if to show off white outer tail feathers. Early migrant in spring and fall. Song similar to MAWA and CSWA - 'haweet haweet haweet haweetya.' Call a nice' tink.' ID: A heavy-bellied thick-set warbler that often looks slim because of its long but broad tail. Green upperparts and yellow upperparts. Ad ?: bright yellow face masked in black can be, in nice light, simply stunning. 1st-year ?: as ad ? with pale tips to black feathers sometimes visible. Ad ?: variable amounts of black bordering yellow face. 1st-yr ?: face bordered by olive (no black). Female WIWA has a different head pattern, shape, and behavior.