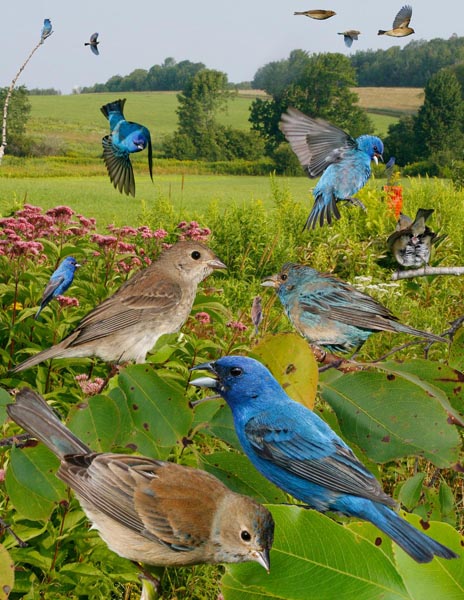 Very common and familiar bunting of open countryside with fields and trees. Usually found alone, sits on trees or wires, belting out its song with head held back, often during heat of the day. Feeds quietly on seed heads on grass verges and in fields, occasionally on the ground. On migration sometimes occurs in large numbers in fallouts. Song: a series of doubled-up high-pitched notes trailing off at end. Call a 'spik,' like other similar buntings. ID: A small, nicely proportioned bunting. Conical bill appears pointed but not large like BLGR. Ad ? br: superb indigo blue (it can look black in poor light), darker around lores, wings, and tail. In spring and fall has varying amounts of nonbr brown feathers mixed in. Ad ? nonbr/1st-s ?: a mixture of brown and blue feathers. Ad ?: brown above with two narrow wing bars; paler underneath with indistinct streaking often visible. Some ?s have some blue on head, wing, and tail. 1st-w: like all-brown adult ? but with more pronounced streaking on underparts.