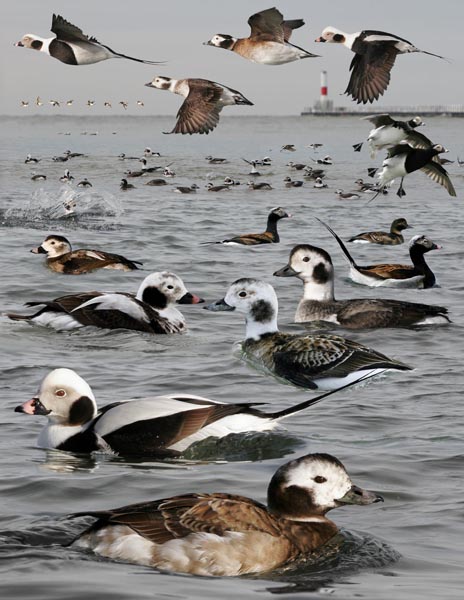 Common on the ocean, bays and river mouths of the N. Usually in small, widely spread flocks of its own kind. Formerly called Oldsquaw. Very vocal with beautiful yodeling call. Shape, behavior, and color all contribute to its very dainty but elegant appearance. Complex molt patterns with several color patterns. Makes a big splash in water when landing. ID: Smallish with thick neck but small head and bill. General impression is usually of a flock of very tastefully pale-colored dainty ducks, with a lot of variation, some with long tails. On wintering grounds, females appear mostly like juvs but are warmer brown on the upperparts and breast (grayish in young birds). Juvs are variable with males tending to have grayer scapulars. Young males become more obvious later in winter and summer as pink develops on the bill and new longer and whiter scapulars are molted. Adult males have long tails and subtle browns, grays, and whites that any decorator would be proud of. From late spring through fall migration both sexes take on a darker appearance. In flight form tight groups; look for all-dark wings with fast wingbeats on pale birds. Often rocks from side to side enhancing similarity to alcids.