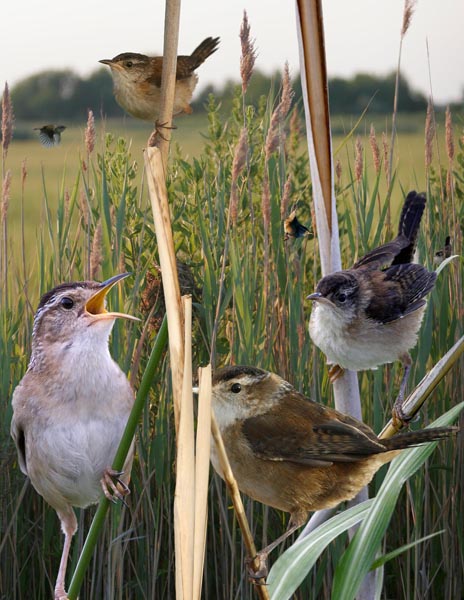 Locally common in cattail marshes. On the E Coast is common on estuarine marshes with Phragmites or small bushes. Belts out its song, always giving 100%. Sometimes sings in flight, a noisy gurgling jumble of notes. Usually stays well hidden as it actively moves from stem to stem, the hard 'chuck' note the only thing giving away its presence. Look carefully and you will often see its large ball shape nest suspended between reeds. ID: Round and medium-sized with a spiky tail usually held cocked. Striking supercilium emphasized by its brown-centered dark cap. Upperparts always dark. Mantle streaked black and white but often tough to see. Wings and tail barred black and brown. Rufous rump and scapulars. Underparts variable from mostly white to strongly brown-flanked. Juv: similar to adult but with subdued markings, often lacking mantle streaks.