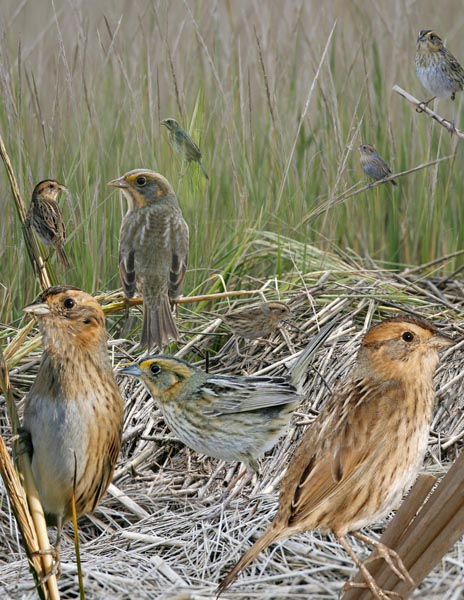 Fairly common in wet meadows and coastal marshes. Formely conspecific with similar SSTS. Secretive, putting its head up to sing its squeezed-out 'p-shhhhh.' LCSP is often found in the same marshes so look carefully. Call a 'tsee,' softer than SSTS. In winter, found in coastal marshes with other 'marsh sparrows' in denser vegetation. Pishing will often bring them to the top of reeds. At low tide creeps around the muddy edges of creeks. At high tide look for them on the highest ground. ID: 3 populations: interior (nelsoni), Hudson Bay (alterus), and coastal (subvirgatus). Interior population brightest with most contrasting plumage, and is only race to winter on the Gulf as well as Atlantic Coast. Coastal birds are the dullest. Hudson Bay population overlaps with both. Id from SSTS by smaller size, more rounded head and, most importantly, smaller bill that gives a gentler appearance overall. Head and breast are fairly uniform orange-buff with a well defined breast band and blurry streaks. Back has diffuse streaking.