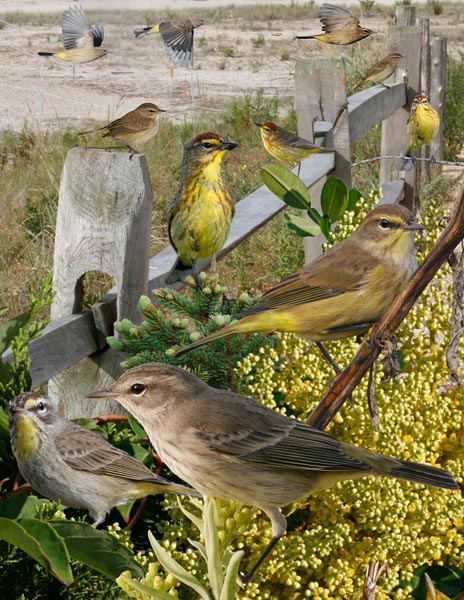 Common ground-nester in spruce bogs, preferring open areas with small trees. On migration and wintering grounds prefers open weedy and grassy areas. This constant tail-pumper feeds on the ground, frequently flying to fenceposts and bushes before dropping back down again. Often forms small loose groups. Can seem friendly, even tame, and is found around humans away from breeding grounds. Migrates early in spring and late in fall, when usually in different habitat from other warblers. Calls 'chek' a lot. Song is a buzzy trill. ID: A long, slim warbler with long legs and horizontal stance. Head is broad with a flat crown. Most striking feature is yellow undertail coverts. Green rump contrasts with browner back. All have a dark eyestripe, long downcurved supercilium, and diffusely streaked underparts. 2 groups: - e. 'yellow' birds, w. 'brown' birds. E. birds separable by yellow underparts with rufous streaks and cap. By fall they are duller but with yellow tones to underparts and supercilium. W. brown birds duller and grayer. Yellow is mostly restricted to throat in summer. Occurs commonly in fall in E and winter in SE. Ages and sexes similar.