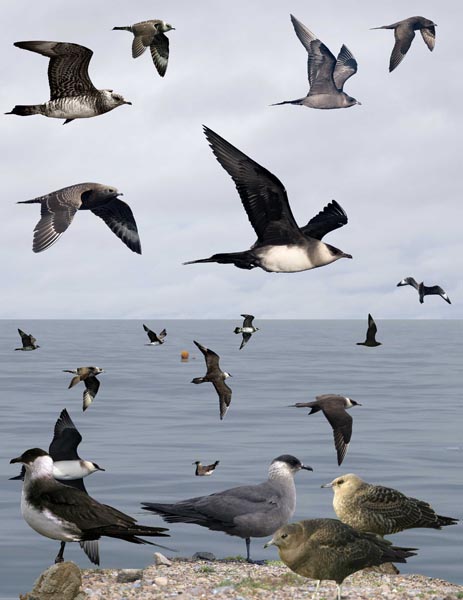 High-Arctic breeder. The common coastal jaeger, rarest far offshore, some winter in the S. The most likely species to be seen harassing gulls and terns, catching dropped or regurgitated food. ID: Between LTJA and POJA in size. Slightly larger than LAGU but smaller than HEGU. Heaviest in the belly, wings often seem pointed and swept back. Flight fast and direct with snappy wingbeats. Sometimes hunts in twos and threes but usually alone. Pointed central tail feathers in all plumages, diagnostic in imms but difficult to see. Ad pale morph br: small, dark cap and yellowish neck, lacks really 'mean' look of POJA. Usually has pale area at base of bill. Paler upperparts than POJA, browner than LTJA. Pointed tail, usually shorter than LTJA. Dark/intermediate morph: variably dark brown, often looks black at distance. Adult nonbr: similar to imms but underwing solid brown. Usually has flank and vent barring with some pale fringes to upperparts, particularly mantle. 2nd-yr: as adult nonbr but with some retained juv feathers, notably some barred underwing coverts. Juvs: incredibly variable. Colors vary from tan to ginger to dark brown. All have paler bill base and narrow pale fringes to feathers. Nape streaked but difficult to see (tertial fringes????). Pointed central tail feather. Jaeger ID is very difficult, largely because of the variations in plumage and size. Focus on flight style, proportions, and shape.