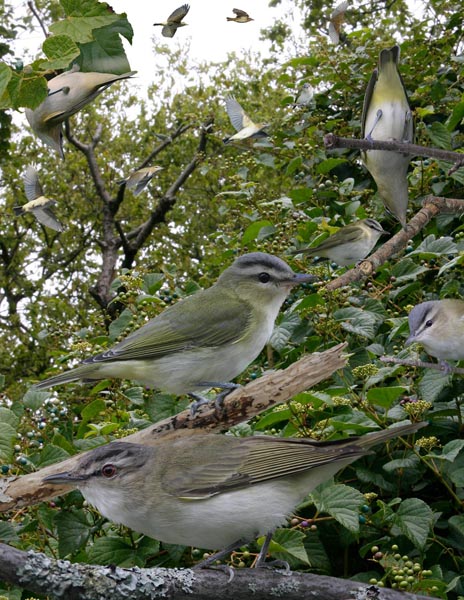 Very common. Found just about anywhere with deciduous trees. On migration, often joins, mixed flocks, and can be commonest bird. Although has typical slow vireo-like movements, it can often move quickly between trees. When disturbed, often the first bird to come close, eyes looking right at you with head pushed forward. Calls frequently, an agitated slurred 'weeer' (somewhat VEER-like) that is sure to bring other birds closer. Song a series of short hurried undulating phrases continuing for a long time: 'wereup weredown,' 'werin wereout.' ID: Flat-crowned, large-billed with a strong facial pattern that gives mean look. Black eyeline and lateral crown stripe bordering bold supercilium make distinctive in most of range. Crown grayish on otherwise uniform olive upperparts that lack even a hint of a wing bar. From below, short-tailed with a yellow vent - this rules out most other vireos even with poor views. Underparts appear off-white though yellow wash on flanks is sometimes obvious. Red eye in adults, dark in otherwise similar juv. Pointed head obvious in flight.