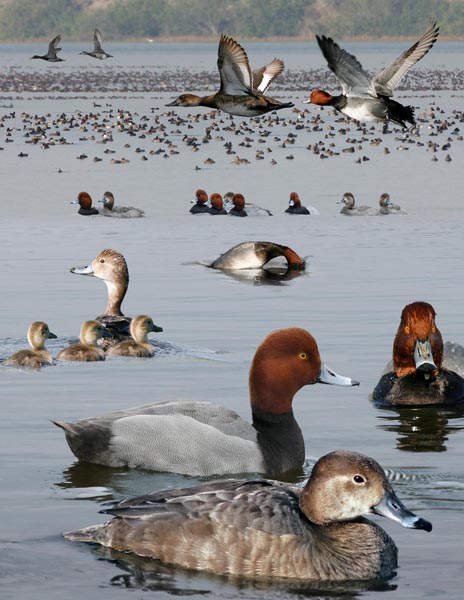 Locally fairly common diving duck, sometimes in big winter flocks on rivers, deeper water inland, and coastal lagoons. Over 75% of N American Redheads winter at Laguna Madre in s. TX. Large flocks also in Great Lakes area but there are large areas of US with only a few. Often with other diving ducks. Breeds in a variety of wetlands. ID: Fairly large with big-headed look, steep forehead and thick neck on a body that sits high in the water. Shape is strikingly different from CANV, closer to some other diving ducks, but still the key ID feature when not sure. Males are distinctive. Females are often confused with LESC and RNDU - focus on head shape and pattern. Females (similar) are most similar to RNDU but Redheads are much paler brown. Scaup lack pale line behind eye and are darker. Adult and imm males (similar) are often compared to CANV because of their chestnut-and-black head and neck. There the similarity ends. If it's not pale, it's not a CANV. Distinctive shape and overall paleness also striking in flight - sometimes the upperwing bar doesn't stand out.