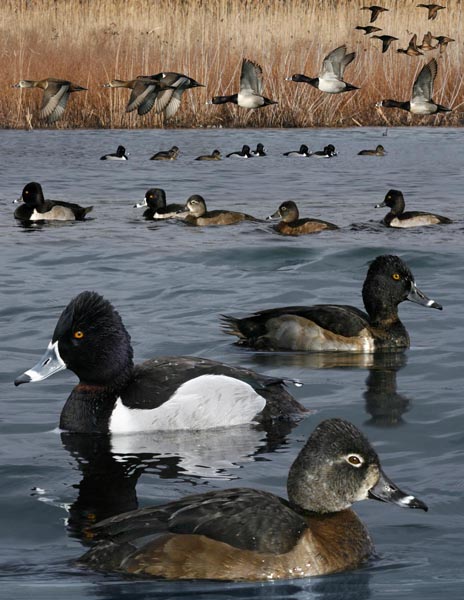 Fairly common. Usually in small groups, sometimes with other diving ducks. Found in a variety of freshwater wetland areas but often in ponds surrounded by trees where it is the only species. Maroon 'ring-neck' on males hard to see and not a good field mark. ID: A variable-looking duck that often gets people scratching their heads. Always focus on the distinctive sloping forehead and peaked rear crown but beware of 'flattened-out' wet diving birds. Perhaps 'ring-billed duck' would be a better name as all birds have white ring emphasized by black bill tip. Adult males appear black-and-gray with a diagnostic white patch at the front of the flanks that's easy to see at distance. Iridescent blue-purple head usually appears black. Imm and eclipse males have a ghost pattern of freshly plumaged males but look 'grungy' with brown mixed in flanks and with duller bill. Females have darker backs and caps than similar species and a more contrasting overall appearance. Distinctive 'spectacles' around eye. Color is variable; gray-and-brown can often be best term to describe them. In flight have broad uniform gray wing bar, but also look for the distinctly patterned males in the flock.