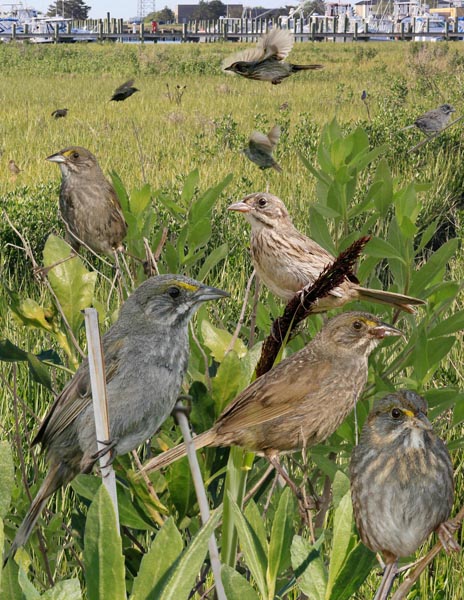 Fairly common in coastal marshes. Behaves like other marsh sparrows. Sits on bushes or reeds, usually in the cooler hours of summer. Often flies short distances across the marsh. Low flight is weak, with rounded wings and short spiky tail dragged along. Spends a lot of time feeding on the ground on exposed mud and gets pushed to high ground at high tide. Sings a lot, a RWBL-like 'teep- zherrrrrr.' Call a hard 'tup.' ID: Large chunky body, big head and large bill, short spiky tail. Bigger than other marsh sparrows and much dingier. Yellow supraloral and white malar create a 'quarter moon' on the face. In winter, has lines of buff patches on the underparts. By summer the feathers are worn uniform gray and brown. Juv: buff breast with streaks recalling SSTS but still has 'quarter-moon' pattern and lacks orange surround to ear coverts. Gulf Coast birds average bolder streaks. Rare Cape Sable race in s. FL has distinct streaking on white underparts.