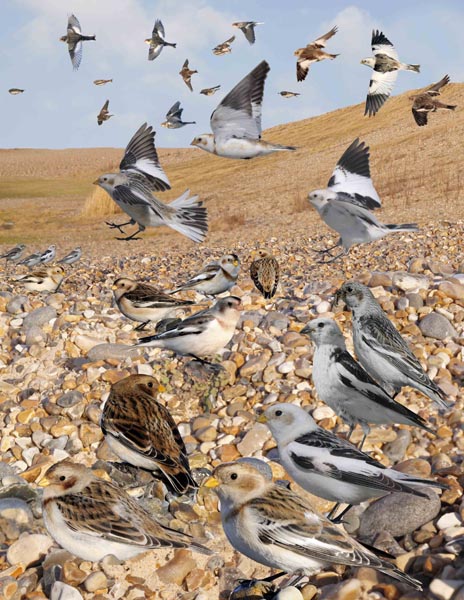 Fairly common tundra breeder. Winters in arable fields, grass pastures, and on large beaches. Occurs in tight flocks from a few birds up to 100. Beautifully patterned brown and white, individuals move in unison. Crouches to feed but then walks fast on short legs and can be deceptively tough to see on snow, sand, or earth. Often take off as one, a mosaic of brown and white, and will move to another area only to return 10 minutes later. In flight, gives a soft chatter with 'zrrt' notes (like RWSW). Also mellow 'tew' like LALO. ID: Large-bodied with small head. Ad br ?: solid black bill and upperparts. Ad ? br: like ? with dark markings on head and on back. Nonbr/1st-yr: similar when sitting with warm brown breast patches, cap, ear coverts, and back (with black streaks). Bill mostly yellow-orange. In flight, age and sex sometimes become clearer. Ad ? has extensive white in upperwing, imm ? the least. By late winter, wear starts to produce darker breeding plumage.