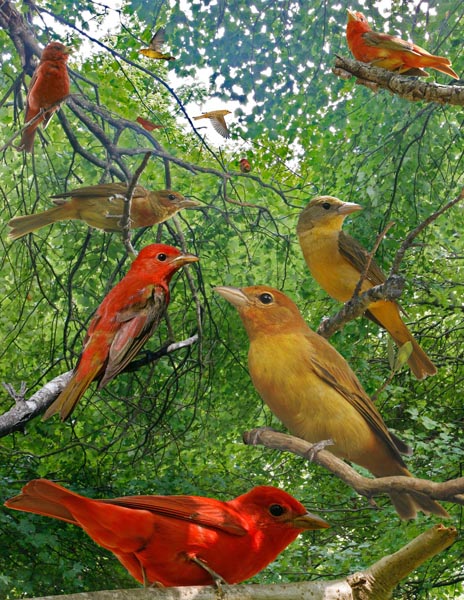 Fairly common s. tanager in open, deciduous, particularly oak, woodland. Despite bright coloring can be very difficult to see, presence often given away by its 2- or 3-note 'nip-n-tuck' call. Sings from within the trees, an explosive series of warbled, robin-like notes. Sits quietly, moves slowly, if at all, making it easy to overlook. A loner. ID: A large, bulky tanager with a broad head, and often peaked crown. Tail is fairly long and broad. Bill is large, with a strongly curved culmen and is distinctively pale (horn), SCTA's is smaller and darker. Birds in farW have larger bills, are paler with contrastingly paler fringes to wing coverts. Ad ?: cardinal red including fringes to wing feathers. ?: uniform green upperparts, mustard yellow underparts. Some have red, mostly in tail, wing coverts, and head. 1st-w: as ad ?. 1st-s ?: variable mixture of red (head and body) and green (tail and wings). SUTA never shows SCTA's strong contrast between wing and body.