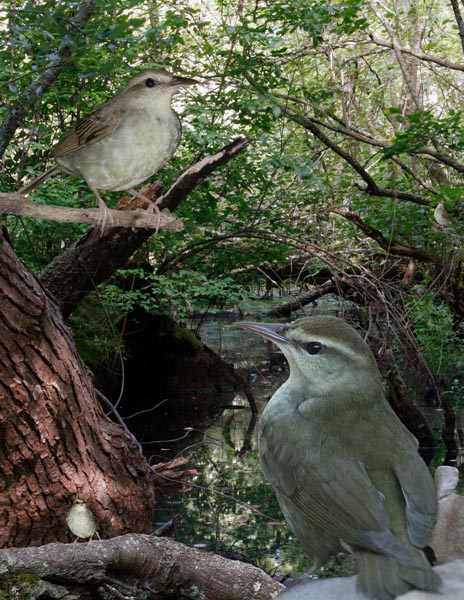 Fairly common in swampy woodland. Regular overshoot to N in spring, sometimes sticking around to sing for a while. Because of its inhospitable environment and its habit of feeding on the ground by turning over leaves, it is one of the more sought-after species. On migration, crawling in thickets in places such as the FL Keys will probably turn up more birds than expected. Sings from higher perches and can be tough to spot. Song similar to LOWA, a series of loud slurred, quick-ending notes (LOWA ends in several twittered notes). Loud strident 'chip.' ID: A large pot-bellied warbler with a short tail and peaked crown. Long pointed bill. One plumage: drab brown above, buff below, slightly paler on throat and vent. Always focus on the brighter chestnut cap set off by pale supercilium and dark eyeline. Only similar warbler is WEWA but has a strikingly different head pattern. Beware of CAWR sneaking about!