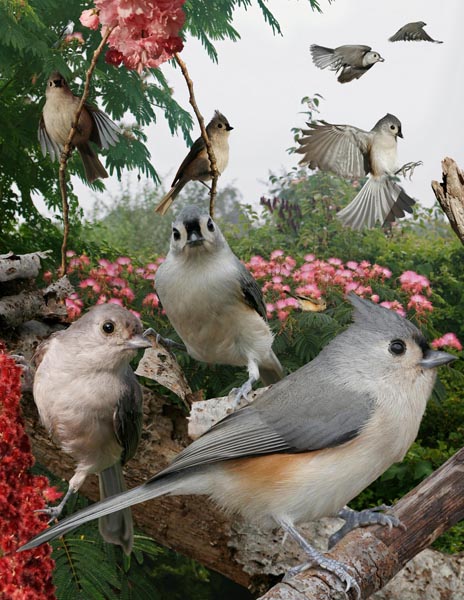 Very common and familiar bird in woods, parks, and gardens and at feeders. Usually in ones and twos, often with chickadees and other species when not breeding, and can be quite tame. A heavy-set bird but very agile, hanging from all angles. Its movements are slower than in chickadees. Hardy, able to find food anywhere, and has no problem chiseling at trunks or holding nuts with its feet while it smacks them open with its bill: not everything that sounds like a woodpecker is one. It has a surprisingly weak and undulating flight for such a muscular bird. Typical song is a loud peter, peter, peter, but has quite an amazing range of calls. Often the first to scold owls. ID: Quite large and bulky, noticeably bigger than a chickadee with a long tail and distinctive crest. Gray above, pale below with markedly buff flanks and with a big, black, beady eye that stares at you. Juv: paler, lacking buff flanks and black forehead, these molted in through fall.