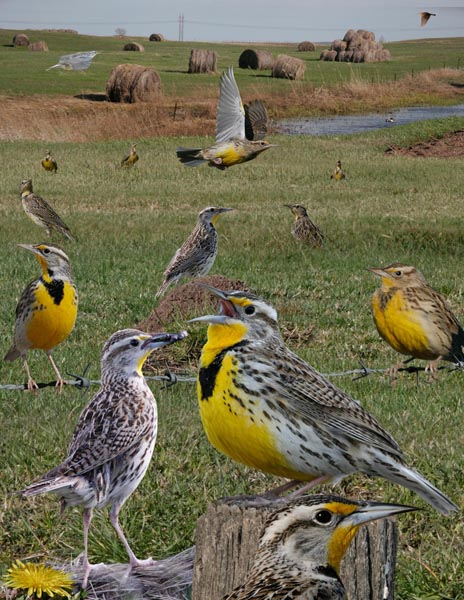 Common w. counterpart of EAME. Often forms tight flocks in winter in arable areas and at roadsides. EAME rarely shares this behavior but otherwise very similar and many not safely identifiable. Song by far the best way to identify this bird, a sound that belongs in the Amazon jungle. Incredibly variable, a melodious, descending, gurgled ramble of notes: 'weet wet weetidleoo.' Songs are learned so overlap between species is possible. Calls a rattle and diagnostic 'chuck.' ID: Notoriously difficult, complicated by individual, subspecific, and seasonal variation. WEME tends to be a paler and less contrasting bird than EAME with whiter flanks with spots rather than long streaks, less rufous tones on upperparts, and blander face pattern. The malar is usually mostly yellow, particularly in males, white in EAMO, a feature that is quite easy to see with good views. White in outer tail feathers less extensive than in EAME.