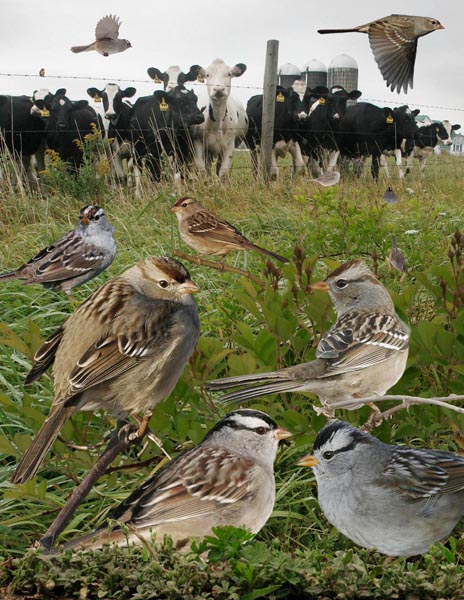 Fairly common in W, scarcer to E. Found in hedgerows, brush piles, open areas with cover, feeders, and farmland. Usually feeds on the ground, near cover for a quick getaway. Forms small groups, but will mix with other sparrows. Song: a clear whistle followed by several notes, fastest in the middle: 'see, see what you can do with this.' Call a metallic 'chink.' ID: Slim with a long tail and small head. Crown feathers often raised, creating peak on rear crown. Ad: bold zebra-like head pattern set against gray neck and underparts beautiful and hard to miss. Back dark brown with contrasting flakes of buff or pale gray. Uniform rump and 2 wing bars. Wings usually appear rufous. Colors slightly duller in winter. 1st-w: a brown bird, it appears relatively uniform with brown cap, has a paler crown stripe with good views. E. population (leucophrys) has pink bill and dark lores. Birds in w. of region (gambelii) have pale lores and orange bills. Many intergrades, and judging these characters in the field is not easy.