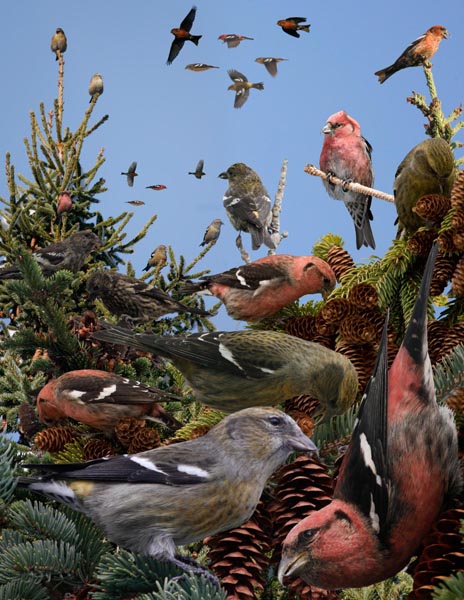 Fairly common in evergreen forest. Behavior much as RECR, though WWCR's bill is adapted to eating smaller cones of trees such as larch and spruce. Rarely mixes. There have been recent large movements into the NE but birds disappear within a few months. Sometimes found in flocks of up to 100. Both species of crossbill vocal in flight and travel in tight flocks. Compact shape with forked tails and broad-based wings make them distinctive; look for wing bars to separate species. Sing from the treetops, a combination of mechanical trills and rattles at different pitches. When not singing, found lower down and will sometimes feed on the ground. Chip notes recall sonar of a submarine. Also redpoll-like chatter notes. ID: From RECR by slimmer build with smaller head and longer tail. Smaller and narrower-based crossed bill. Strikingly larger double wing bars with white-tipped tertials on darker wings. Darker lores. Ad ?: pinkish red. Ad ?: diffusely streaked underparts, usually greenish gray with some yellower or orange-tinged. Juv: heavily streaked. Juvs quickly molt to adult-like plumage.